The history of Asian-Americans in the Paso del Norte borderlands begins during the late 19th century. During this time, Asian peoples set out from the Asian continent and into ports throughout North and South America Pacific, then into border regions such as El Paso-Juárez. These transnational patterns were set in motion by social, political, and economic factors affecting both continents.

In the 19th century, China would experience transformations both abroad and within. Overpopulation, commercial agriculture, export manufacturing, and droughts displaced many farmers from their traditional landholdings. Additionally, socio-political crises such as the Taiping Rebellion during the 1850s divided loyalties between the Qing empire and the anti-dynastic Triad organizations. Then, the Treaty of Nanking of 1842 minimized the power of the Qin Empire by placing British Imperial control over the commercial ports of Canton, Amoy, Fuzhou, Ningbo, and Shanghai. These so-called treaty ports would remain essential nodes of unfettered global trade. According to historian Grace Peña Delgado, “British imperial control, ethnic violence, and the durability of the opium trade combined to create a national landscape in which migration became an ever-greater probability.”[1] These multiple factors culminated in the late 19th century, thus solidifying transnational migratory routes throughout the Pacific and into the US-Mexico borderlands.

One of the main routes from China to the North American continent was through Angel Island and the western United States via the Californian coast.[2] For Chinese farmers displaced from their traditional landholdings and those Chinese individuals experiencing political turmoil, the promise of guaranteed work on the transcontinental railroad and the prospects of gold mining on the Californian frontier would be seen as temporary for regenerating financial security before returning home again to China. Other significant routes of Chinese migration were via the Mexican port cities of Guaymas, Mazatlán, and Manzanillo, or deeper south in Lima and Callao, Peru. From the mid-16th to mid-18th century, Spanish Empire Manila galleons had pre-established these southern Pacific routes for transporting gold and other luxury items to and from the Philippines and Mexico. However, during the late 19th and into the mid-20th century, as exclusionary laws made it increasingly difficult to emigrate to the United States via San Francisco, these land routes through Mexico and into the United States via Baja California, Sonora, and Chihuahua became increasingly important.

The Overseas Chinese in the El Paso-Juárez Borderlands

In the El Paso-Juárez borderlands, the first Chinese migrants settling this borderland were sojourners working for various railroad lines that would meet at the Pass of the North. The first of these to reach El Paso was the Southern Pacific on May 26th, 1881. Moving eastwards from Los Angeles, this line would eventually meet in 1884 with the Galveston, Harrisburg, and San Antonio line near Pecos, Texas. The Mexican Central was the last rail to reach El Paso in 1884, connecting El Paso to the international markets of the entire American hemisphere.[3] Historian Julian Lim notes, “track lines radiated thousands of miles from the El Paso-Juárez border, across the Southwest (Southern Pacific); through the fertile Rio Grande valley and the Great Plains (Santa Fe); across the great expanse of Texas to the Arkansas border (Texas & Pacific) and to New Orleans (Galveston, Harrisburg, & San Antonio); and through the vast mineral and agricultural lands of northern Mexico (Mexican Central).”[4] Due to these extensive railroad networks spiraling out of El Paso, city boosters would label this area as the “imperial highway of nations.”[5]

Unfortunately, reports at the time state that the Southern Pacific laid off one thousand of their Chinese laborers upon reaching El Paso.[6] In a few months, a Chinese community emerged downtown at the edge of the business district, next to the city’s disposal dump. Appearing as a single boarding house catering to displaced railroad workers and Chinese travelers, this site would soon spread into laundromats and restaurants around town. Indeed, the location of El Paso’s early “Chinatown” would today encompass El Paso’s San Jacinto Plaza and spread into Union Plaza near the railroad lines.[7] When the city razed the boarding house on the corner of Mills and Oregon in the 1920s, they were surprised to discover subterranean passages from one cellar to another.[8] Moreover, archeological evidence from these sites confirms that transnational Chinese cultural ties between the motherland and El Paso’s Chinatown continued over time.[9]

Japanese sojourners had been working on Hawaiian sugar plantations since the early 1880s and began to immigrate to the United States in large numbers starting in the 1890s. From 1900 to 1907, Japanese immigration swelled.[10] Nonetheless, nativist politicians and Pacific Coast workers began labeling Japanese migrants under the same derogative terms used against Chinese migrants, such as the “Yellow Peril” and the “Asian Menace.”  Thus, like Chinese migrants after 1882, the land route by way of Mexico became increasingly more attractive. According to historian Patrick Ettinger, “between July 1906 and July 1907, Japanese immigrants represented the largest non-Mexican alien group presenting for inspection at the El Paso port of entry, with over 2,000 admitted.”[11]

Most Japanese who settled in El Paso during this early period were farmers, miners, or businessmen. Some families were able to become successful, like Tashiro Kuniji, who became one of the wealthiest farmers in the El Paso region.[12] Others, like Dr. Furugochi Sadakatsu, became leaders in the local Japanese American community and were known for their philanthropy not just among his ethnic group but across racial lines. Dr. Furugochi was known to provide health services to Mexicans with no income and was one of the founders of the “Nippon Gakuen” on Myrtle Street, the first Japanese school for Japanese descendants. However, these accomplishments by early Japanese migrants were extinguished after Franklin D. Roosevelt signed Executive Order 1066.[13] The internment of the Japanese would become one of the U.S.’s worst atrocities committed to its citizens. Still, Japanese migrants in the El Paso-Juárez borderland were crucial in transforming our region into a prime site for the constant restructuring of American citizenship and immigration laws.

Thus, we need to consider the contributions of Chinese and Japanese contract laborers, farmers, miners, and businessmen that helped transform the El Paso-Juárez borderlands from a desert frontier into an international commercial hub fueling the modernization of the United States.

Tsuyako, Miyasato. “The Japanese in the El Paso Region,” M.A. Thesis, the University of Texas at El Paso, 1982

[7] San Jacinto Plaza is contoured by the Mills Building to the west on the corner of Mills and Oregon Streets and by the Cortez Building and its adjacent Cortez Building Parking Lot on the corner of El Paso Street and Mesa Avenue to its east. For a map of El Paso’s early Chinatown visit https://www.unm.edu/~toh/china/el-paso.html. Also see Fahy, “Chinese Borderlands Community Development,” 39-40 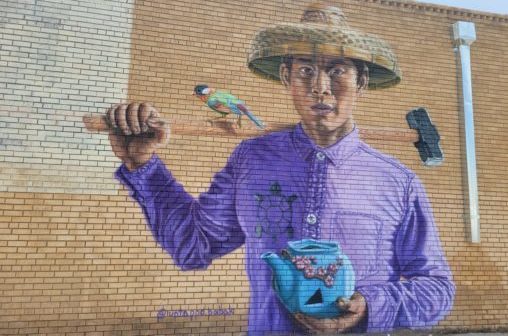